When a doula gets doula’d

A doula is a person (typically a woman) who sits with a woman during labor and supports her in a variety of ways through what is often a trying or difficult time in her life and tries to make it as easy as possible so that she comes out on the other side of it all the better for the experience. I wanted to share one of those times, I felt one of my clients did just that for me…

I have been blessed in my doula practice that I have been able to serve an international base of clients. Through many of them I have been blessed to learn many different cultural remedies for common pregnancy ailments, postpartum rituals, and recipes for the many meals I have been served. It is often glaring to me the lack of a hospitality that we have here in the U.S. I am often stunned by the amazing lengths that I am treated by the mommas that I feel I am supposed to be serving and end up serving me.

One of my fondest memories was a Malay mom. This was her third baby and I would visit her on a monthly basis. She would always fix me large elaborate meals when I came and I got to know her and her family very well. She fixed a variety of Indian and Malay dishes for me because her husband was Indian. This was some of the most delicious food I have tasted in my life. I still miss her cooking 7 years later…

I sometimes felt we spent as much time talking about me as her. I later understood that she wanted a level of closeness with me because she was very far from her family and craved a closeness that she was used to with women in her country. We became very close and she had an amazing and beautiful birth. She even invited my whole family to come to her house for dinner one night and we had a blast! Did I mention the food and how well this sister could cook???

After the birth of her daughter, I began to get very sick. No one knew what was wrong with me and I was slowly deteriorating. I began to lose a lot of weight and was a shadow of myself. (We later found out that I had double pneumonia that spread and infected my kidneys.) She always called to check on me and make sure that I was ok. She referred me to a friend of hers who knew a good Chinese herbalist and I began to go and slowly improved from a regime of herbs. I went to visit her, right after I first started my herbs so I was still weak and sick, but able to get around. Their visa was running out and they were in the process of selling everything and packing up. Her husband had not secured a new contract and so they had to go back to Malaysia. I just wanted to pop in and say one last quick goodbye (I hate goodbyes!). I wanted to keep it light, and pop in and out. I had dragged myself out of bed, not listening to my husband who wanted me to rest. I felt compelled to at least tell her one last goodbye. She had become more than just a client, she had become my friend.

Months of what started off as hospitality had grown into a sister-friendship. I sat down and we talked and talked. Of course she insisted on feeding me. I insisted I wasn’t hungry. I had lost my appetite with my illness and could barely keep anything down. I remember I was so cold ALL the time. I sat on the floor. They had either given away or sold the vast majority of their things. We sat across from one another with the food on a box or a crate. She insisted on serving me. It was a simple dish, lamb knuckle bones in some type of a curry-like sauce over rice. There might have been some naan (bread) as well…I don’t remember. What I DO remember is that the moment her food touched my lips, I felt the warmth travel down to my bones. I was wearing a sweater and a coat because I was just cold all the time. I felt the warmth of the heat from the food as it radiated out. I initially told her that I would just have one with a little sauce and rice because I thought I would not be able to keep anything down. She insisted on feeding me more…and boy did I eat. I sucked every last drop of sauce off of that bone. I gnawed on the bone and sucked out the marrow. I wiped my plate clean. I don’t believe I left much for her husband (sorry). I mean lamb knuckle bones? Who would have thought? I know you the reader aren’t saying yum-I wouldn’t either-but I swear it was one of the best things I have eaten in my life. I felt that the coldness and emptiness was being pushed away and my nose was actually running a little bit and I wasn’t shivering like usual.

I left her home that day feeling warm and comforted. As I walked back to the car I thought about how much I was going to miss her friendship. I knew that I had made a connection that was going to last forever. As her doula I was able to walk with her, offer her suggestions to alleviate her discomfort during labor and nurture her as she went through labor and delivery. As my doula, she was able to make suggestions of how I could get better, held a nourishing space for me as I was sick so that as I went through that discomfort I came out on the other side all the better for it.

I thought of her today. I randomly think of her and her family often. We chat sporadically on Facebook. Doulas don’t have to be someone who is in your life everyday-but someone who was there when you needed them, even if you thought you didn’t 🙂 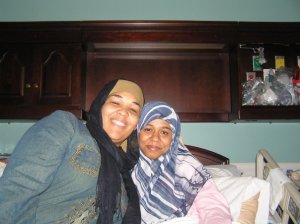